11street introduced Gong Xi Wang Wang campaign with RM20 million worth of Ang Pow coupon giveaways and overall discounts up to 88% a few days ago at Hilton KL. As the lunar new year is approaching, 11street also conducted a nationwide survey to better understand the psyche of online shoppers recently.

In total, 1,854 respondents took part, in which the findings revealed that Malaysians are prone to last-minute shopping, and concurred that family and friends mattered most. On a side note, the campaign was launched to accommodate the shoppers' shopping needs.

From the survey, 11street also found that at least 96% of survey participants intended to shop online for the upcoming festivity, driven by better prices, discounts and promotions. Having understood the shopping behaviour of Malaysian consumers, 11street’s Gong Xi Wang Wang campaign will attract last-minute shoppers, with a 48-hour delivery to those in Klang Valley, and a ‘Click and Collect’ service to enable shoppers to eliminate wait time for shipment and collect their purchases themselves at selected physical stores nationwide.


The survey also disclosed that 70% of participants were willing to spend on their family and loved ones during Chinese New Year, with 3 times more spending to purchase items for gifting purposes, rather than for themselves. Among the top 5 activities these respondents wished to partake in with their family included dining out, visiting friends, shopping for those they cared about, watching a movie together and travelling to a foreign country.

At the same time, 77% of the respondents confessed that they would buy clothes and shoes online - a figure that was 3 times more than food. Meanwhile, a pool of participants acknowledged that the top 3 categories they would purchase online are fashion items such as Chinese traditional wear, cheongsam and groceries including food and beverages, as well as home and living items as they prepared for the festivity. 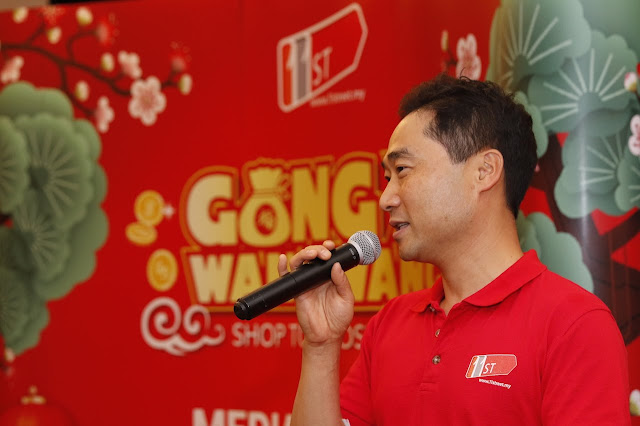 In conjunction with Chinese New Year, 11street's Gong Xi Wang Wang campaign will be giving away over RM20 million worth of Ang Pow coupons applicable to more than 10 million products with overall discounts up to 88%. Other offers include 'Good Luck Flash Deals' with selected products for as low as RM0.88.


During the campaign period, 11street will also be selling PETRONAS e-vouchers at up to 30% discount off the original price value allowing Malaysians to gather with family and friends for visiting, dining and outing, on top of gift hampers and Chinese New Year dining deals.

Media were also treated to enjoy yee sang and CNY course meals in conjunction with Chinese New Year celebration. There were lucky draw session as well whereby the lucky winners can walk away with awesome prizes such as Sony smartphone, ELBA cooker, hampers and many more. Thank you so much 11street! I enjoyed my yee sang of the year with a bunch of 11street team and the rest of the media.