Hello readers, I'm back with another post. I bet those who had added me in Twitter and Facebook knew what post i'm going to write today. To those who doesn't know, yes! I joined the NTV7 Feel Good Run in the category of 3km Run with Celebrities in conjunction with celebration of NTV7's 13th Anniversary.
I know readers out there might said, "Aiya, 3km only. No big deal~" And yeah it might be no big deal to readers out there. But im sorry to say that it's a big deal for a jogger who didnt trained for almost two months, went there and just ran 3km non stop for 23 minutes. Should i just said its a big DEAL for me? 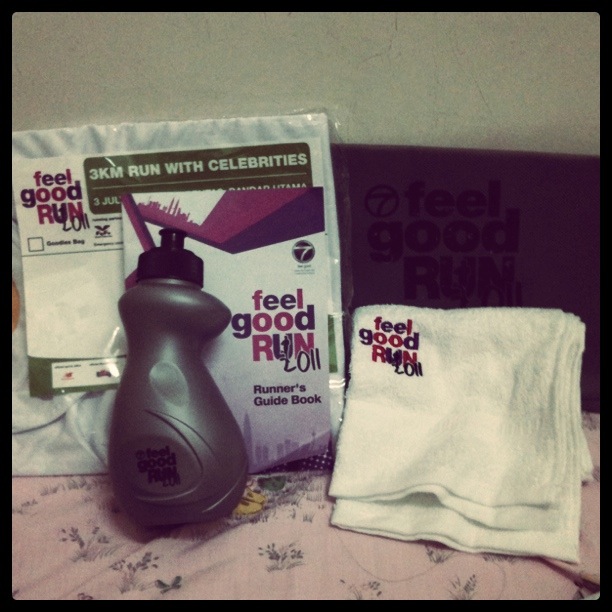 Running kit given by the organiser including water bottle, New Balance tee shirt, towel, message bib, a draw-string bag and a runner's booklet.
I kinda proud of myself for completed the run in 23 minutes. At first i estimated that i would complete in half and hour's time but thank god my determination pulled me through and made it in less than half an hour which is a good record for me since i didn't run for almost two months. 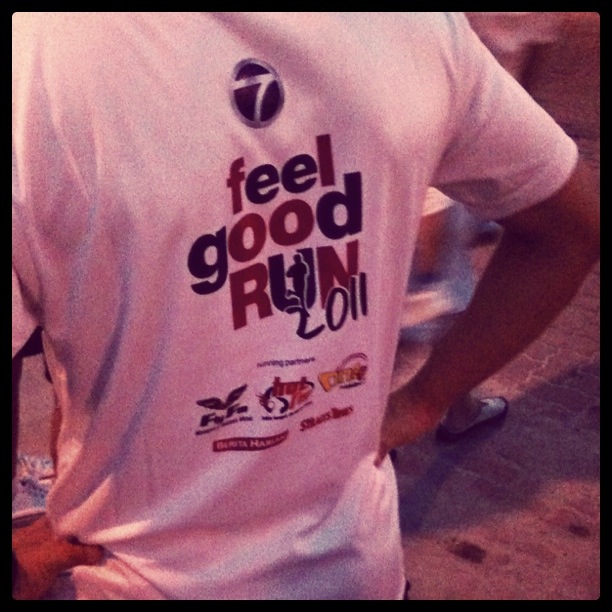 7.20 am in the morning.
My friend, Zian accompanied me to join this run and thank god i had a companion on that day. We were supposed to be there at 6.30 am. And i was afraid that i might lost in BU since i hadnt been to Bandar Utama for quite sometimes, so i got up at 5 am in the morning and got myself ready to go at 5.30 am. 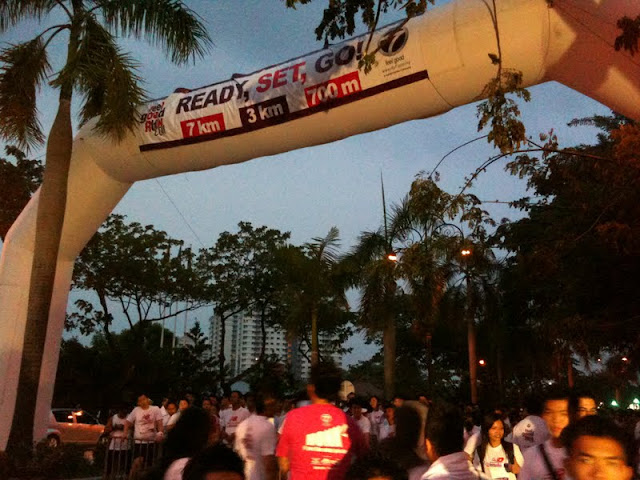 We need to gather at the start/finish line for some warm-up session by the Celebrity Fitness  professional trainers. 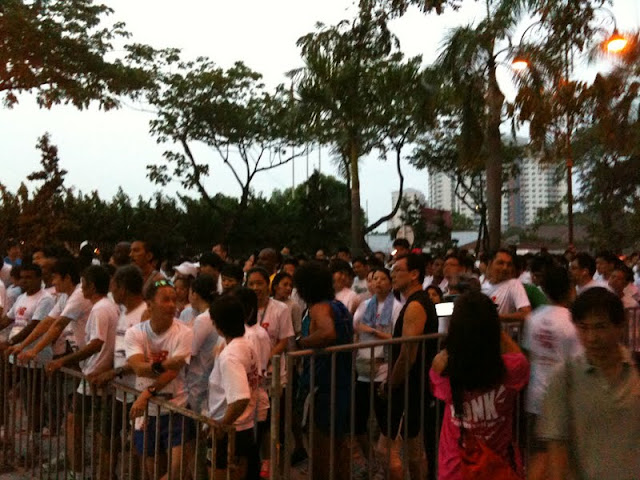 Almost everyone gathered and couldnt wait for their warm up session.
I stood by the side waiting for my category which would start at 7.40am cause I wanna stood in front. I was too 'kiasu' cause i didnt want to be left far behind. =p 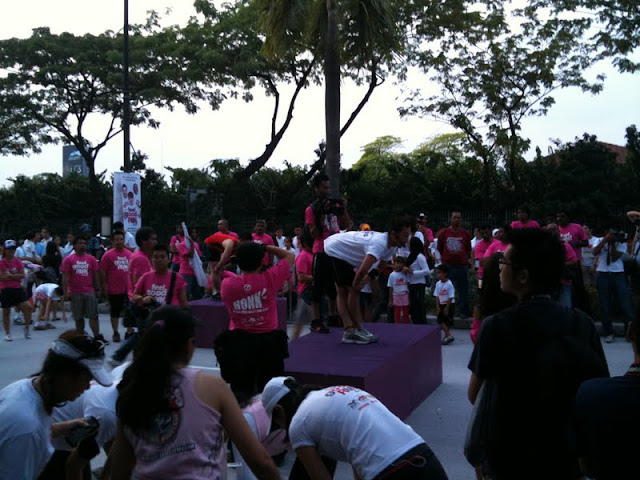 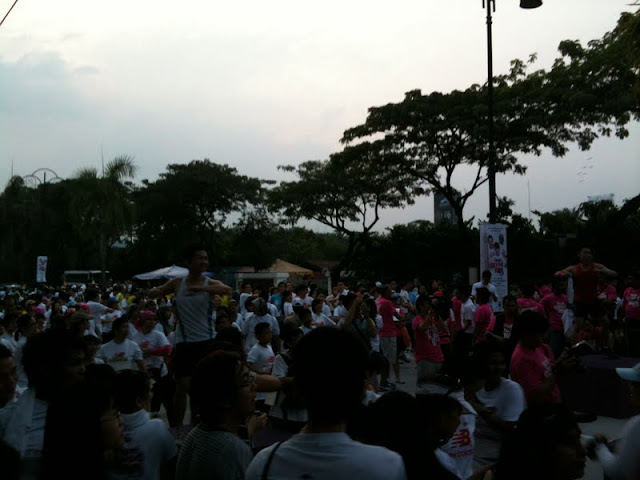 There were many celebrities joined the 3km Run with Celebrities. They were Alan Yun, Abang Naz and his family, Julie Woon, Debbie Goh, Leslie Chai, Brenda Chiah, Yann Yann, Cai Pei Xuan, Frederick Lee, William San, Lawrence Wong, Wind Lee, Baki Zainal, Nicholas Ong, Niki Cheong, Monday Kang, Desmond Tey, Jaclyn Victor, Mayjune and many more. P/s: Sorry guys that i didnt take any photos of them cause i only have an iPhone with a lousy camera with me. 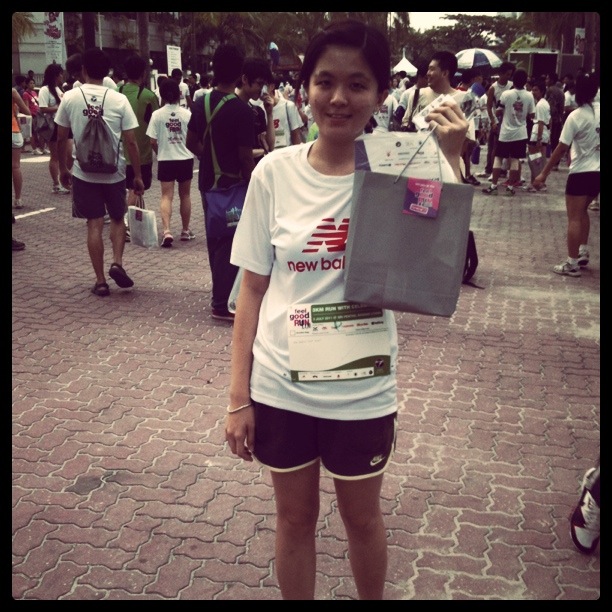 Collected the goodies bag finally.
They were free Milo drinks, ice-creams, biscuits, cereals and etc. This was totally awesome and i never really come across such run giving such many freebies to the participants! Way to go NTV7! Happy 13th Anniversary to you NTV7! 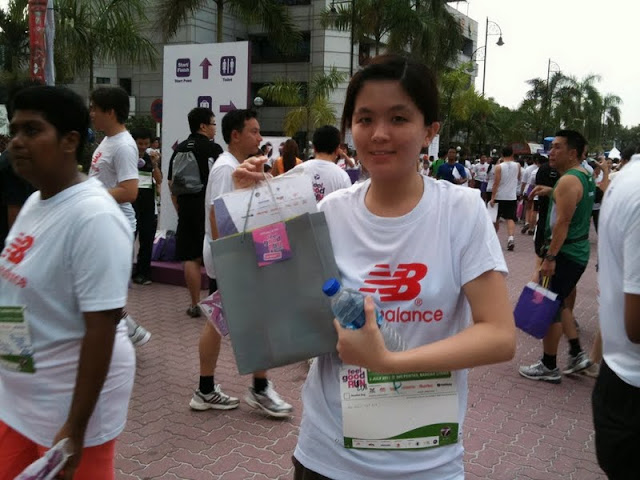 With the goodies bag again. 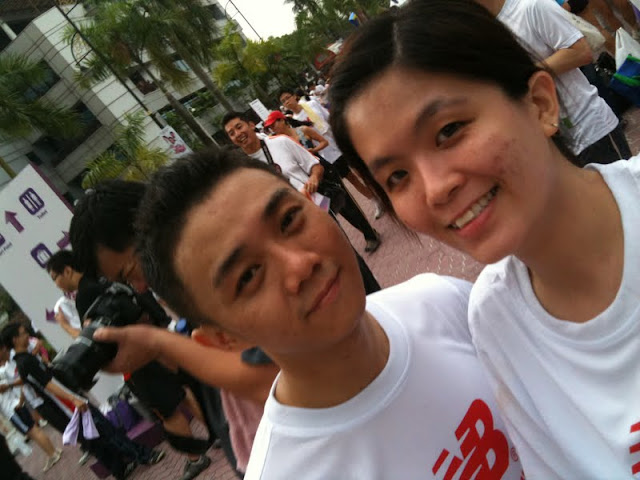 With a good friend of mine, Zian. (he was so fast that he left me behind.lol =p) 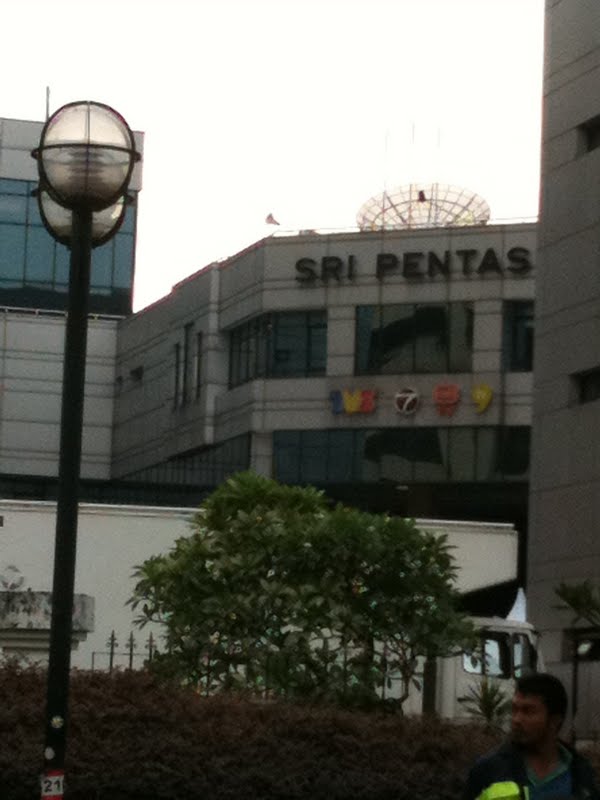 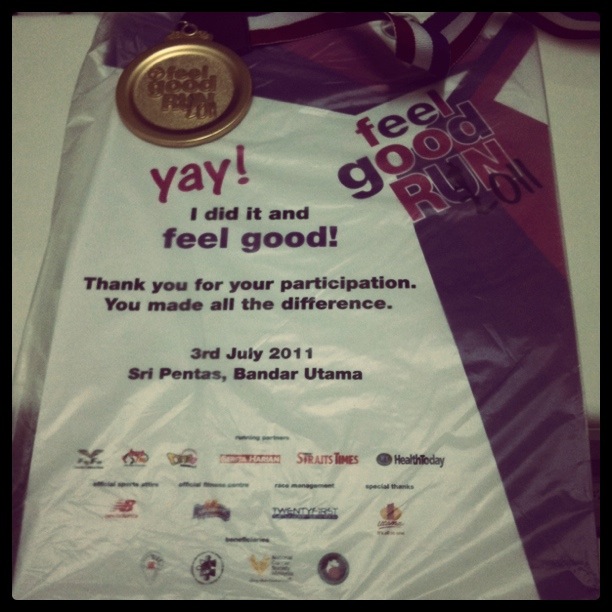 A certificate of participation and a memente from the run.
Went back to to Wangsa Maju to reward myself for completed the run. Bought a Subway breakfast and i was totally contented of my results that day. 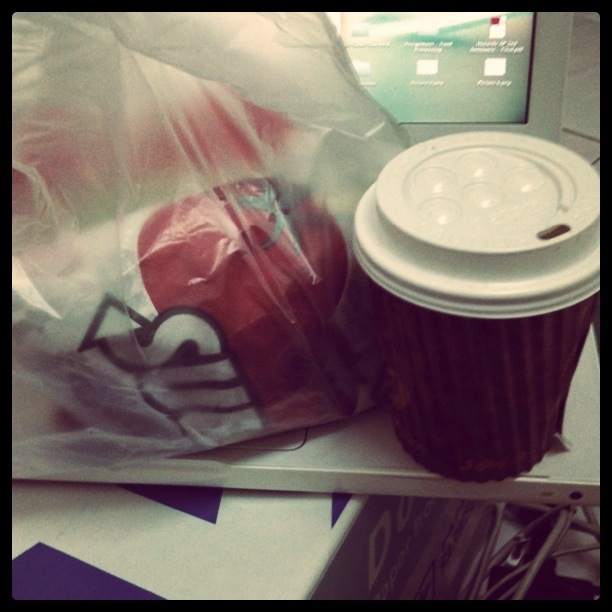 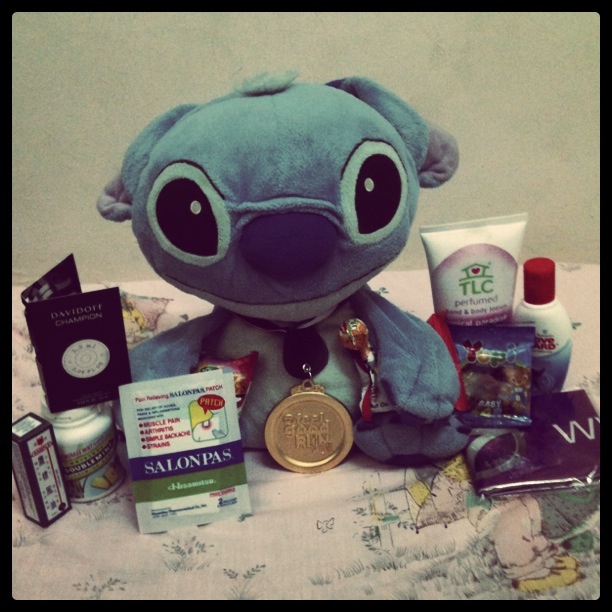 Cute Stitch posing with the stuffs i got from the goodies bag and the memente. *giggles* 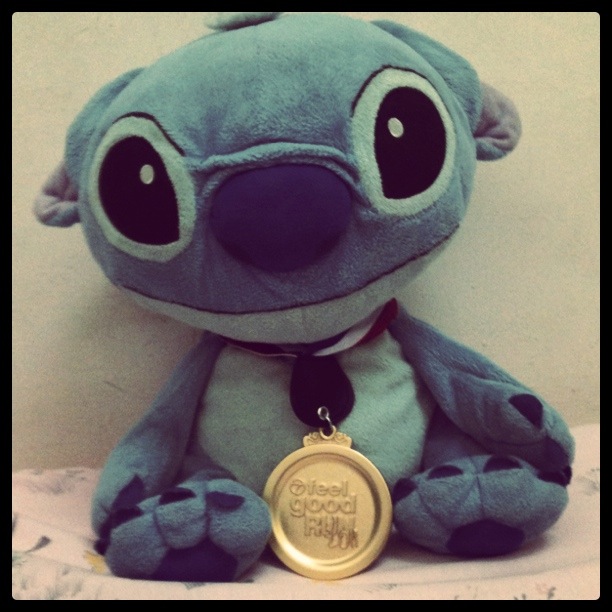 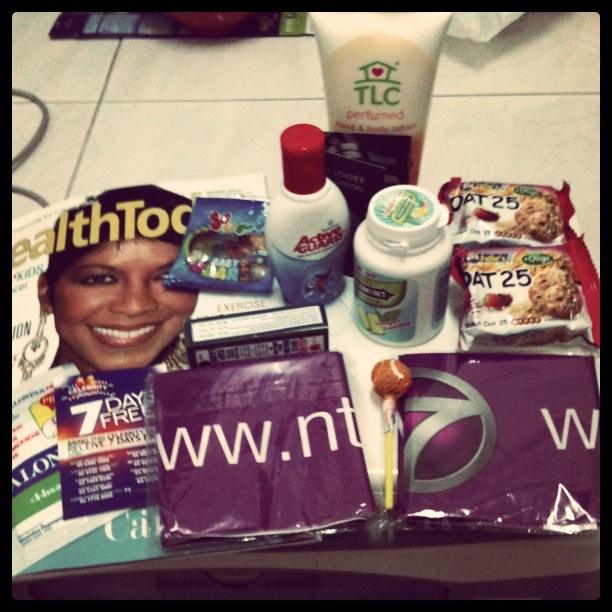 Closer look of the stuffs from the goodies bag.
I was happy that i managed to complete the run within the time set by myself. Even though i was left behind but i feel the fun of running alone while listening to my iPod and with my Nike+ shoes and sensor. I felt the energy running through my body and the feeling was superb great! I didnt regret for joining the run. And the best part was my body and my muscles didnt ache at all even though i didnt run for quite sometimes.
Can i just say that Nike running shoes rawks? LOL. Sometimes it wasn't just about the shoes that brings you the comfort but also the do-s and dont-s you need to be aware of before you start exercising. But of course, comfy shoes like my Nike+ Pegasus Limited Edition brings out the best result apart from warming up before you start your daily routine. Hope to join such meaningful event again. ♡
Last but not least, an ugly photo of myself to cheer you guys on boring Saturday. 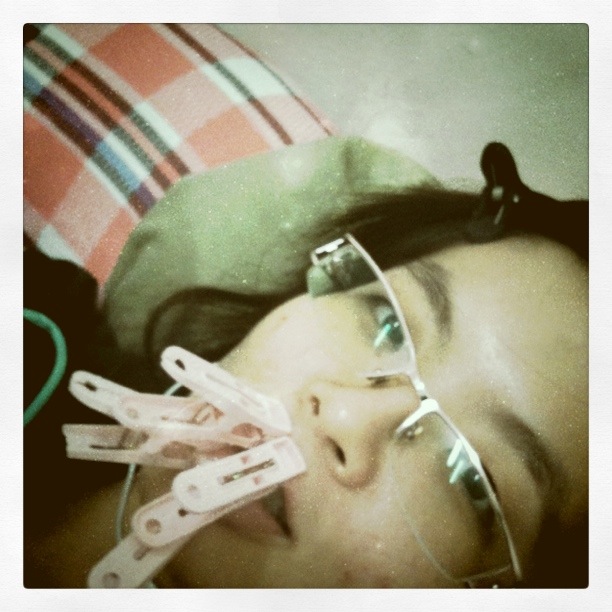