Premiere Screening of The Muppets ❤ 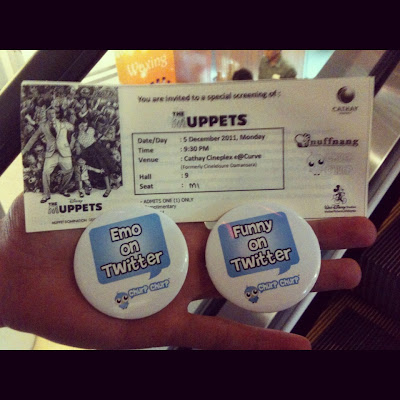 Got myself a pair of free tickets to watch the premiere screening of the Muppets in Cineleisure, The Curve last week. Thanks to Churp Churp for the invitation. Couldn't find a partner to accompany me for movie and finally got one to watch with me at the very last minute. Thanks Edwin for accompanying me.
The Muppets was awesome. The Muppets is a 2011 American musical film. Walter, portrayed primarily by a muppet, lives with his brother Gary, a human, in Smalltown. The two became Muppet fans when they watched The Muppet Show in their youths. As adults, Walter and Gary continue to live together in Smalltown. Gary plans a vacation to Los Angeles with his girlfriend Mary, to celebrate their tenth anniversary, and he invites Walter along so he can tour the Muppet Theater. Gary is pleased to spend time with both Mary and Walter, though Mary feels that Gary's devotion to Walter detracts from their relationship.
In Los Angeles, the three visit the Muppet Theater to find it derelict. During the tour, Walter sneaks into Kermit the Frog's office and discovers Statler and Waldorf selling the theater to Tex Richman, an oil magnate, and his cohorts Bobo the Bear and Uncle Deadly. Waldorf explains that if The Muppets can raise $10 million they can repurchase the theater. Once Statler and Waldorf leave, Walter learns of Richman's true intentions: to destroy the Muppet Theater and drill for oil underneath.
Walter recounts the conversation to Gary and Mary and appeals to Kermit at his mansion. Kermit is distressed to learn the news, and realizes he must organize a show to raise the money, which the Muppets have not done in years. Walter convinces him to try, and they set off to reunite the group. Fozzie Bear is performing with the Moopets, a group of uncouth Muppet impersonators, in Reno, Nevada, and Kermit persuades him to leave Reno. Gonzo has become a plumbing magnate. Despite his initial objection, Gonzo decides to perform, destroying his business and joining them. Animal is in a celebrity anger-management clinic; he rejoins them, but his sponsor, Jack Black, warns him to avoid drums. During a montage, the other primary Muppets are located and rejoin. In Paris, the group finds Miss Piggy working as Vogue Paris's editor for "plus-sized" fashion. Unable to convince Miss Piggy to return, the group replaces her with her Moopet counterpart Miss Poogy.
The Muppets pitch their telethon idea to several TV networks, but are turned down. Due to a popular show's sudden cancellation, Veronica eventually gives the Muppets a 2-hour opening in her network's schedule on the condition that they find a celebrity guest. The Muppets repair the theater, but their rehearsal fails and Kermit cannot find a celebrity guest. Miss Piggy returns and forces Miss Poogy out. Kermit persuades Walter to perform and find his talent, while Mary goes sight-seeing alone.
Realizing there is not yet a guest host, Kermit entreats Richman to return their studio, but Richman refuses. Richman reveals that the Muppets will also lose their rights to the Muppet name; it will be given to the Moopets. Miss Piggy organizes the Muppets to kidnap Jack Black, who serves as a celebrity guest. Mary returns to Smalltown after Gary forgets their anniversary dinner. Gary and Walter each want each other's help with their problems and they have a falling out. Gary realizes he must improve his relationship with Mary, while Walter realizes he was meant to be a Muppet. Gary returns to Mary, while the telethon succeeds with celebrity support and Black as host. Richman cuts the power to the theater, but Gary and Mary rush back and repair the wiring. Uncle Deadly turns on Richman and stops him from destroying the transmitter antenna.
Out of acts, Walter finds his talent, performing a whistling act to the audience's acclaim. When calls are stopped by Richman, a glitch is discovered when it is revealed the Muppets only garnered $99,999.99. Kermit states that they tried and will start over, together as a family. The Muppets, Walter, Gary, and Mary walk out of the theater and discover a vast gathering of fans. With Gary's encouragement, Walter greets the crowd with the Muppets. Gary proposes to Mary, while Richman returns the theater and the Muppet name to the Muppets after Gonzo's failed "head-bowling" act from the telethon gives Tex a head injury.
You guys should watch. I love Kermit the Frog and Miss Piggy in the show. :)
xoxo
P/s: Blogging via phone is super hard. Hmm.
Email Post
Labels: churp2 outings premierescreening reviews themuppets