Premiere Screening of The Descendants ❤

Right after my midterm which ended at 7pm on last Wednesday which is on 15th February 2012, i hurriedly went back and took a shower and rushed for the premiere screening of The Descendants with lil Jamie Yeap in Tropicana City Mall. 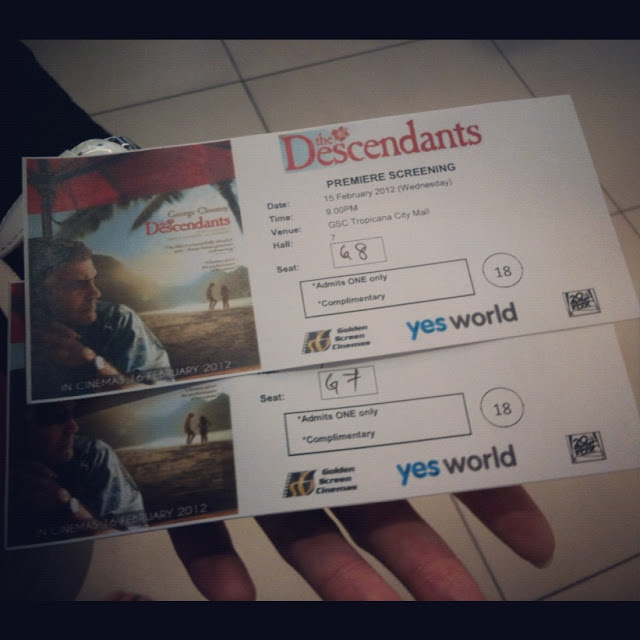 It's my 3rd premiere screening on that week with the first one was Beauty and the Beast 3D followed by This Means War starring Chris Pine, Tom Hardy and Reese Witherspoon. =) This movie was abit slow-moving. However this movie brings a lot of moral values to us in the current situation and society nowadays.
Matt King (George Clooney) is a Honolulu-based lawyer and the sole trustee of a family trust  that controls 25,000 acres of pristine land on the island of  Kaua'i. The trust will expire in seven years because of the rule against perpetuities, so the King family has decided to sell the land to Kaua'i native Don Holitzer for development. Just before family members are ready to formally endorse the deal, which Matt favors, a boating accident near Waikiki renders Matt's wife, Elizabeth, comatose.
Matt and Elizabeth have two daughters, 10-year-old Scottie (Amara Miller) and 17-year-old Alex (Shailene Woodley). Matt is not very close to his daughters and refers to himself as the "back-up parent." With Elizabeth in a coma at Queen's Hospital, he is forced to confront Scottie's inappropriate behavior with other children and Alex's drinking.
Matt learns that Elizabeth will never awaken from her coma, which means that under the terms of her living will she must be disconnected shortly from life support. He tells Alex, but not Scottie, that Elizabeth will not recover and must be allowed to die. Alex tells her father that Elizabeth was having an affair at the time of the accident. Matt confronts two family friends, Kai and Mark, and learns that Elizabeth's lover is Brian Speer (Matthew Lillard).
What happens after that? Just catch this movie in cinemas starting on 16th February 2012. =)
P.s: Sorry the late movie review. Was busy with tests, assignments and workshop. Anyway graduation photo session is next week! Can't wait to set the theme with my buddies! *wide grin*
❤ lots of love, janiceyeap ❤
Email Post
Labels: outings premierescreening reviews The Descendants Tropicana City Mall Year2012 Yes4G