This is my 2nd movie outing with my sister after The Call. Thank you Churp Churp for the invitation! Guess what? I have completed the whole set of the Churp Churp badges FINALLY! So happy about it! Yay!~ 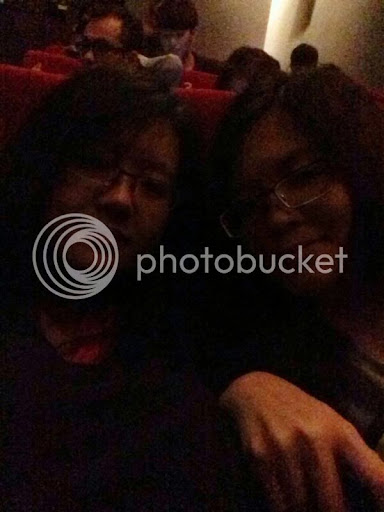 Sorry about the bad quality photo of iPhone5 front camera =/ With my sis, Jamie btw. =)

Anyway back to the movie review and synopsis of the movie. 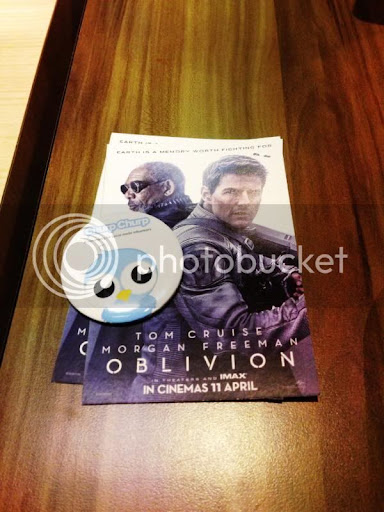 Thank you Churp Churp for the invitation!

Following an alien invasion 60 years earlier which nearly destroyed the Earth, former Marine commander Jack Harper (Tom Cruise) is drone mechanic 49, one of the last few humans stationed on the planet. Jack lives in a tower standing thousands of feet above the Earth where he and his colleague Victoria are part of an operation to clean up the remaining forces of the invasion and extract the planet's remaining resources.


Jack and Victoria maintain contact with civilisation via a video link with their commander, Sally, and are due to join the rest of humanity on Saturn's moon Titan in two weeks. Jack suffers from recurring dreams and flashbacks, featuring images of New York before the invasion and an unknown female. Assisting Jack in his cleanup work are weaponised 'drones', sophisticated airborne machines that scour the landscape for, and destroy, alien lifeforms.

Nearing the end of his mission, Jack rescues a female stranger (Olga Kurylenko) from a crashed spaceship. She is encased in a sleeping capsule, in a state of hibernation, but Jack immediately recognises her as the woman in his flashbacks. Shortly after, Jack and the stranger are captured by an insurgency led by Malcolm Beech (Morgan Freeman). Inside the insurgent stronghold, the insurgents claim there are no aliens on the planet, and demand that he reprogramme a recently captured drone.

Meanwhile, Victoria sends a drone to scout the area for Jack, but it is soon disarmed by members of the resistance. Beech Jack and the female stranger to venture into an area of the landscape ostensibly unapproachable due to high levels of radiation, advising Jack that it is in this place that he will find answers to his questions.

Jack and the stranger climb the remains of the Empire State Building, and the stranger reveals herself to be his wife, Julia. Despite his initial shock at this revelation, it allows Jack to reconcile his flashbacks, and he knows it to be the truth. It is revealed that the ship in which Julia crash landed was a NASA shuttle that had been orbiting the Earth for 60 years. The duo travel into the supposedly lethal radiation zone, where Jack is stunned to come face to face with drone mechanic 52, a clone of himself. Jack and the clone engage in combat that ends with Jack choking the clone unconscious.

Beech later reveals to Jack that the life forms he encountered is only one of thousands of clones, including himself, resulting from cloning the real Jack Harper, who lived 60 years ago. These clones are used to repair drones and scout for 'alien' presence. His colleague Victoria is also revealed to be a clone. The resistance is revealed to be the planet's last remaining human outpost, exposing the truth that Jack and Victoria's superiors, i.e. Sally, are the 'aliens', using the clones to drain the Earth of its vital resources. The drones, it is revealed, are programmed to attack humans, not aliens. With this in mind, Jack desperately tries to convince Victoria to escape with him and Julia, leading her to report his insubordination to their superiors. Jack is scheduled for termination by Sally, who sends a drone to their location immediately.

In the ensuing attack, Victoria is killed by the drone before Julia is able to disable it with a gunshot from Jack's aircraft. Jack and Julia return to the resistance camp, where they help to repair the stolen drone. During the repair process, Beech reveals that the resistance has a nuclear device and intends on using it to destroy the alien stronghold; an enormous space station orbiting Earth. Three drones pick up the DNA trail of Jack and attack the base, resulting in a prolonged firefight before the drones are able to be overpowered.

The resistance suffers many casualties, including Beech who appears to be mortally wounded. To his frustration, the captured drone has been damaged and is once again unfit for service, however the nuclear device is still intact. With no other choice, Jack volunteers to fly the device to the station himself, delivering the 'hibernating' Julia as an explanation for his presence. Jack places her back into her sleeping capsule (the same one he had found her in when he first encountered her) and sets off to the space station, telling Sally that he is bringing the survivor to her. During the flight Jack listens to the flight recorder recovered from Julia's crashed shuttle and, in a series of flashbacks, it is revealed that his original self was on board the same spaceship as his wife.

In 2017, with Victoria as his co-pilot, Jack navigates the ship to investigate a mysterious object orbiting Earth (revealed to be the alien space station), but on approaching, the ship is drawn towards the object. At that point, fearing the worst, Jack released the shuttle containing the sleeping capsules (one of which held Julia), as it would be able to break free from the object's gravitational pull. The shuttle is that which crash landed earlier in the film, and from which 'Jack' rescued Julia.

Jack enters the space station and confronts 'Sally', who is revealed to be an enormous, amorphous stone-like being. Sally is disappointed when Jack opens the sleeping capsule, revealing that he has not brought Julia as promised, but a wounded Malcolm Beech, who had previously expressed his desire to be there at the moment the nuclear device was triggered. (Julia, unbeknownst to her, has been delivered to Jack's forest retreat; a lakeside cabin where he has stored keepsakes and mementos of human life, such as books and vinyl records.) With Sally growing hostile, Jack quickly recites a story about Horatius, a Roman soldier who held a bridge against many enemies, and then proceeds to trigger the device, destroying the entire space station. By doing so, the remaining drones on the Earth are also forced to shut down.

Three years later, Julia is living a peaceful life in Jack's forest retreat, and has given birth to a daughter, although she is still grief stricken by Jack's death. Through the surrounding forest, members of the former resistance appear, having visibly eschewed their armour and weaponry for more 'human' clothing. As Julia recognises them, 'Jack', the clone of team 52, steps forward and the two hold each other's gaze.

Review
Not up to my expectation. Was expecting it to be very exciting and interesting but too bad it wasn't. The technology they apply and equipments that they use in the film are really good which I  am really amazed. Just hoping that the plot would not have too draggy. But definitely the main actor, Tom Cruise is really hot and handsome! *drool* Lol! Rate of the movie: 2.5/5.